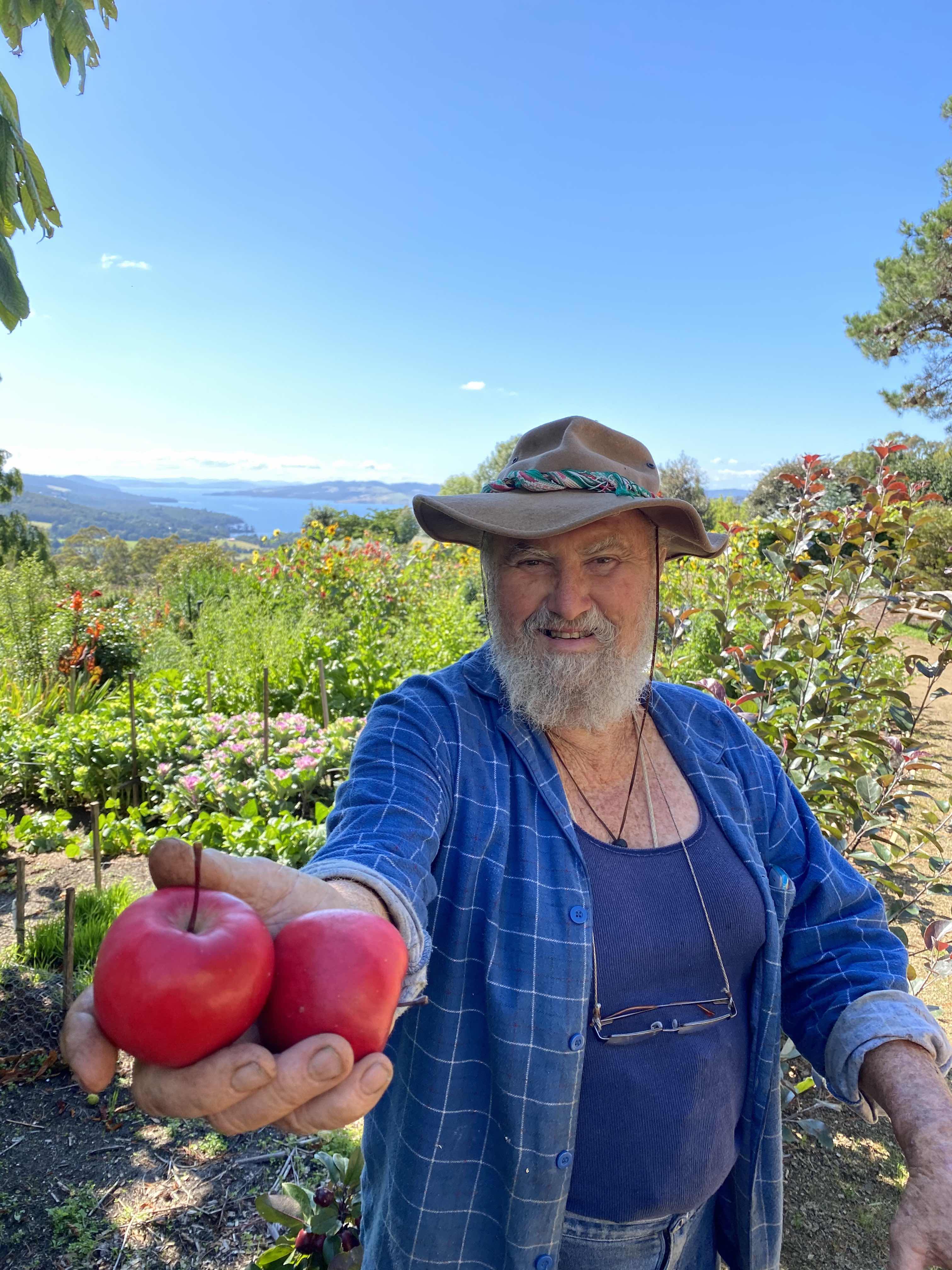 Tim Sansom “On the way to the research farm every week, I used to drive through Huonville, and on the side of the road I noticed a huge old crabapple tree, probably 7–8 metres tall,” Bob Magnus says.
“One day I stopped, had a look, and cut one open. They were riddled with codling moth but were red inside. I thought ‘Wow, this is an amazing apple’.”
Bob tasted a few and found the flavour was good, and the fruit quite big for a crabapple – bigger than a golf ball. Later, he took grafts from the tree, which has a slightly weeping habit with pink flowers, purple wood and leaves. He started selling the crabapple, naming it ‘Huonville Crab’.
Bob says it’s believed that all red-fleshed apples like these originate from a wild red apple (known botanically as Malus niedzwetzkyana) found in forests in central Asia, especially Kazakhstan and Kyrgyzstan, where it is now endangered. The wild apple is red inside and out, and purple on all parts but it’s dry and shrivelled up and has virtually no flavour.
“All over the world at the moment, people are trying to use it as a progenitor for more modern varieties,” Bob says. “I was in the happy position of finding one that had probably already come from that and already has a good flavour, which is quite an incredible amount of luck for me.”
With the ‘Huonville Crab’ growing in his orchard, Bob started collecting and sowing seed from apples it produced. He reminds me that apples are not self- fertile, they need other varieties to cross-pollinate with.
“And with 300 varieties you never know what it might cross with. I started growing it from seed and got ones that fruited, many were small and shrivelled and uninteresting. But the one we’ve patented and are selling (‘Magnus Summer Surprise’) is a very acceptable apple with deep pink flesh. I can’t tell you what the male parent is, but the female is the ‘Huonville Crab’.
It is an early producing apple, ripening in mid- summer. It has a sweet but slightly tart flavour with some berry overtones, excellent for eating or making cider, which is pink (see photo). Pollinators include Fuji, Golden Delicious, Granny Smith, Pink Lady and Jonathan.
Bob says it’s taken about 20 years to develop this apple, but that’s pretty normal in apple breeding.
“I’m 76 and I’m just really enjoying the journey,” he says. “I like to discover new things. I’m looking forward to the next variety. This is only one of quite a few different red apples I’ve got. I’ve got lots more seedlings coming on.
“I’m planting seed of the ‘Summer Surprise’ now [to see what grows], not the seed of the ‘Huonville Crab’. I’ve got 20 or 30 of them. Given the time it takes for them to bear, I mightn’t be around [to see the end result] but it’s still fun doing it. You’ve got to be pragmatic about these things.
“Around 95 per cent of my life is gone, so I’ve got to pack a lot into the last 5 per cent!”
To read the rest of the article buy the latest Organic Gardener Magazine Australia.