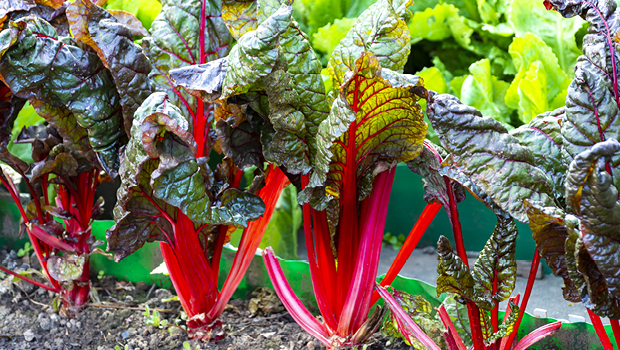 Have you got the green rhubarb blues? JUSTIN RUSSELL offers some tips on how you can grow red rhubarb, and why it’s one of his all-time favourite plants.

iStock One of my favourite teachers at high school was Mr Geyer. He taught maths, which I hated, science, which I enjoyed, and coached the footy team, which I loved. Old Man Geyer as we called him was a quirky character who liked to wear stylish green jeans and had a habit of grunting “rhubarb, rhubarb, rhubarb” when one of his classes was doing too much talking and not enough working.
Problem is, every time he said the word rhubarb three times in a row I got a pang of hunger. I was a voracious 17-year-old playing two games of football a week and training nearly every day. Stewed apple and rhubarb with Mum’s home-made custard was (and remains) one of my all time favourite desserts, so I’d go away from a chemistry class dreaming of ruby red rhubarb chunks boiling away merrily on the stove. I can smell the aroma now!
The key to red rhubarb
Obviously, I’m a complete sucker for the stuff. And it seems lots of others are too. I wrote an article on rhubarb a few years ago and for months after I was inundated with questions, not so much about the growing the plants, but about how it might be possible to make green rhubarb turn red. That’s right, nearly every rhubarb lover wants to grow red rhubarb and for good reason, I think. It looks beautiful, both in the garden and on the plate, and has the characteristic tart flavour that most people associate with rhubarb.
The answer to the question is quite straightforward. Some rhubarb varieties will get redder during winter, but for the most part, green rhubarb will always be green. No amount of fertiliser, sun, shade, water or other tricks people try will change the colour, and the best you can hope for is a pink blush at the base of a the stem. The only way to get guaranteed red rhubarb is to buy bare rooted crown divisions from a reputable nursery in winter.
You can try your luck with seed grown plants, but there’s always a chance you’ll score a dud. Rhubarb is highly variable when grown from seed, a fact that seems to be lost on the big retail nurseries that love to sell rhubarb seedlings in six-cell punnets. Often the punnets carry a label bearing a bright red plant, with the name of mostly green variety such as ‘Victoria’. This is fine if you enjoy eating green rhubarb, but it isn’t as piquant, or as pretty, as red rhubarb.
Invest in rhubarb crowns
Spend a little bit more and invest in a couple of crowns, or at this time of year, semi-advanced potted plants (if you can find them). Because crowns are vegetatively propagated, they are exact clones of their mother plants with the same genetic profile, the same growth habit, and most important of all, the same colour to the stems. Keep an eye out for ‘Sydney Crimson’, and my favourite, the garnet coloured, compact growing variety ‘Ever Red’. It’s a sure fire way to overcome the green rhubarb blues.